It’s that time of year again where we all jump the gun and try and logistically work out each round of the Champions League, from the dream match ups to the easier draws for our favourite teams. This year the biggest name for us here in the UK is seeing little old Leicester City up there with the big boys of European club football. The Premier League champions have been seeded into Group G where their toughest challenge looks to come from Porto, which for the neutral is quite exciting to see if the dream can continue for Leicester and perhaps lead them to a big match against the likes of Barcelona, something fans could not have imagined this time last year but is not very possible.

Other worthy group news is Arsenal seeding into Group A with French big boys PSG. Will Arsene’s team make it through to the knockout stages for the 17th consecutive year? Rebellious Noise’s own Dan recently wrote in his Premier League predictions article that he felt that this year may be Wenger’s last, which if correct will mean this is the managers last attempt at European glory, something he so narrowly missed out on 10 years ago in Paris.

2015 champions Barcelona have been paired with possibly the strongest of all the 2nd tier teams, Manchester City. Guardiola’s Sky Blue men will face off against his Catalonian first love in what is sure to be a match up to remember. Last year’s champions Real Madrid have drawn 2013’s runners up Borussia Dortmund whilst the winners from that year, Bayern Munich have ended up in Group D with last years finalists Atletico Madrid.

Check out the full result of the draw below: 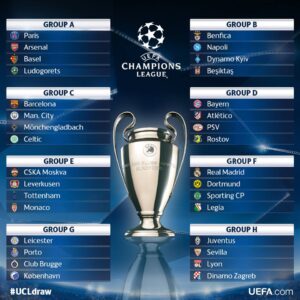