As the new Premier League Season arrives, teams have scoured the world to try and improve their playing squads for the new season. I have compiled a list of the 11 players who are new to the Premier League who could have a big impact this season:

The world’s most expensive ever goalkeeper will provide competition for Claudio Bravo at City. There is no clear indication from manager, Pep Guardiola who will play as his number one, but there is a clear winner of who takes our Number 1 jersey. The young Brazilian is just what we need between the sticks.

Manchester City have strengthened their backline with no fewer than three new full-backs. We’re opting to give Danilo the nod at Right-Back, although he is just as comfortable over the other side too, playing at Left-Back his experience at Real Madrid and Porto gives him that big game edge, and he could well be one to watch for City this season.

Signed from Roma, German international defender Antonio Rudiger, is the only defender signed by Antonio Conte this season, and with the departures of John Terry, Nathan Ake and Kurt Zouma there will definitely be some game time for the big German. He will need to be in good form to keep any of Conte’s heroes from last season out of the team, with Cahill, David Luiz and Azpilicueta being the preferred three at the back for him.

This was a deal we heard about that could have happened last season, someone who was high on Jose Mourinho’s wish-list. The Swedish international is a tough young centre-back who can also play in the full-back roles too. United will look for him to form a formidable partnership alongside one of last season’s stand out players, Eric Bailly. How will he cope with the physicality of the Premier League though? Well, he’s training opposite Lukaku, so we hope, fairly well.

Arsene Wenger dipped into the transfer market to bring the young Bosnian into the club pretty early on, comfortable at both Left-Back and the left side of midfield, he could be a key player in a number of formations for Arsene Wenger, who favoured a system with three central defenders last season, Kolašinac could well fit into the left-wing-back role and provide competition for Nacho Monreal.

A shrewd first signing of the transfer window from Craig Shakespeare, he was tipped to join Sunderland last season, but they pulled out at the last minute. The former Sevilla captain was a bit-part player last season. But he definitely had a impact in the centre of the park. He could be the steel that Leicester need, and their fans will be hoping that he has the Kante effect.

Purchased to add some steel to the midfield and protect the defence, having lost Nemanja Matic to Manchester United, Bakayoko is fresh off the back of a great campaign with Monaco he earned his first cap for France in March. He is a big powerful young man with an eye for a tackle and pass, with a touch of Yaya Toure about him. Let’s hope he can light up the Premier League like Toure Did.

Everton got a lot of their business done very early on, Dutchman Klaassen was instrumental in Captaining Ajax’s run to the Europa League final last season, he was highly thought of by Ronald Koeman, who made him one of his first signings, he can play in the middle of the park, in the number 10 role, adding competition for an already stacked Everton Midfield. With the addition of Europa League football, Klaassen’s experience there could prove vital.

You’d be forgiven for thinking that David Silva was the main man at City, but he has got a new neighbour in both position and shirt numbers, the man who is likely to play alongside him wearing Number 20 (David wears 21) is an exciting young attacking midfield player, 11 Goals and 12 Assists in 58 games in all competitions, is a great indicator of why Guardiola splashed out close to £50million pounds for the Portugese international.

Another Frenchman signed by Wenger, potentially he could link up with France international team-mate, Olivier Giroud. The two could form a dynamic strike force. Averaging almost a goal every other game in his time at Lyon, the little livewire certainly knows where the goal is, he may be short in stature, but he can certainly be a big player in the big games. Young Frenchman, starting out his career as a winger, transforming into a striker… Sound familiar Arsenal fans? They’ll hope so.

Everyone thought he was going to end up in a Manchester United shirt for this season, but apparently they and Real Madrid were too far apart in their valuations of the player. Chelsea, however, were willing to stump up the fee. Great in the air, physically strong, and hopefully a bit calmer than Diego Costa. Chelsea may not need to change their system too much. Experience with both Real Madrid and Juventus. La Liga and Serie A, as well as Champions League experience could prove invaluable for them, and at just 24 years of age, some could say his best years are still ahead of him. 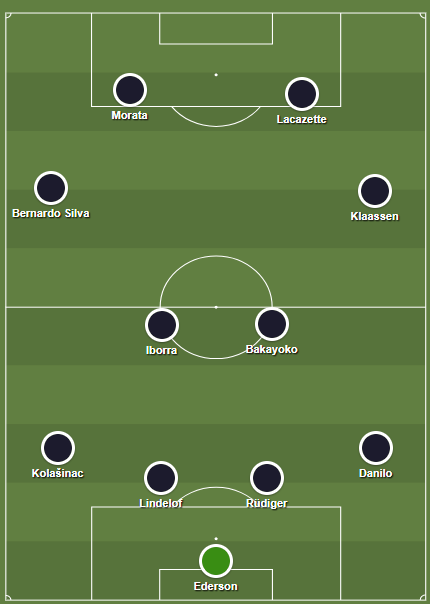 Check out my RETURNING Premier League Starting XI with players that are getting their first experience of top flight English football here.